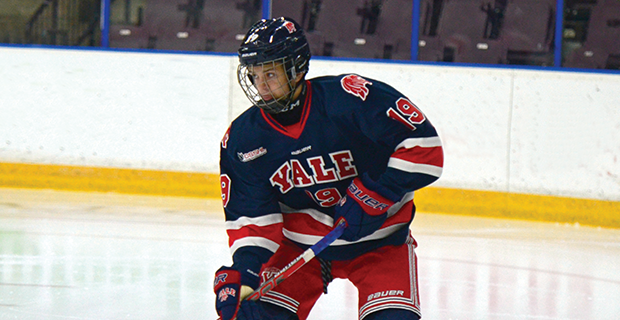 JAKE CHIASSON, THE 2018 HOCKEYNOW B.C. MINOR HOCKEY PLAYER OF THE YEAR POWERED BY HOCKEYSHOT, CAN TALK A GOOD GAME. BUT WHEN HE GETS TO THE RINK, IT’S ALL BUSINESS

Something to talk about.

Jake Chiasson and mom Rachael would talk about hockey and anything else that crossed their minds on the hour-long drives from Abbotsford to any of the countless road games they attended over his minor-hockey career.

Now that the HockeyNow 2018 B.C. Minor Hockey Player of the Year powered by HockeyShot has been busing with the Yale Academy Bantam Prep squad, mom admits she misses the road trips from their Fraser Valley home 70 kilometres east of Vancouver to rival rinks across the Lower Mainland of B.C.

“I remember thinking that at the very beginning, this is a lot of driving, being in Abbotsford. After about a year, I realized how lucky I was. Because we wouldn’t put the music on. He’d sit up front and we’d just talk the whole time. I can’t believe how much we talked, to and from the hockey games,” Rachael Chiasson says. “I’m kind of sad in the last year that he goes to every game on the bus. The thing I miss most about that is the conversations we used to have to and from the rink.”

And they had plenty to talk about.

The 15-year-old forward’s progress -- from Abbotsford Rec’s Tot and Pond Hockey programs, through the ranks of Abbotsford Minor Hockey, to Yale -- has been quite the journey.

“We could see he was getting ahead when he was eight or nine,” Rachael recalls. “He just lives and breathes hockey. He loves other sports as well. That’s one nice thing, we’ve never once had to wake him up for hockey or talk him into going.”

The 6-foot-1, 165-pound power forward completed his second CSSBHL campaign with Yale this past season, scoring 20 goals and adding 48 assists in 30 games. Chiasson added a goal and four assists in four games at the John Reid Memorial Bantam tournament.

He moves up to Yale’s Midget Prep squad this fall after being drafted in the first round (15th overall) by the Brandon Wheat Kings in the 2018 WHL Bantam Draft.

“Jake’s a character kid. He’s the best leader I’ve ever coached,” says Brad Rihela, Chiasson’s head coach for his past two seasons with Yale Bantam Prep. “He takes care of his teammates. He cares about winning. He does things the right way. He practises extremely hard. He trains extremely hard. He really wants to be a hockey player.”

The strong skater with a high hockey IQ brings a complete game to the rink, and isn’t shy about imposing his size and skill at both ends of the ice.

“He’s a very cerebral player. Very smart and responsible defensively,” Rihela says. “He’s the type of guy who’s not going to score 40 goals, but he’s going to keep 40 out of his net. Having said that, he does have an elite-level skill set. I see him on every team all the way up being a power-play guy who can kill penalties.

“You can put him out on the ice in any situation.”

The moment that stands out for coach Rihela came at the Pat Quinn Classic tournament this past winter in Burnaby, B.C. Without giving it a second thought, Chiasson laid out to block a shot at a pivotal moment in the final game against the Burnaby Winter Club Academy Bruins, who eventually won 2-1 in overtime.

“He took a shot, more or less, off the chest,” Rihela recalls. “It epitomized what he does for his team and what he’s willing to do to win a hockey game. He’s the type of kid who takes pride in his leadership. He takes pride in doing things the right way.

“It was a huge play that really stood out for me.”

For the player, it’s about leaving it all out on the ice. Every game.

“This year, I worked on point production and offensive shifts. This past season, I really upped my foot speed. Obviously, I just want to keep improving so that hopefully one day you can play junior and then pro.”

The Major-Junior puzzle piece has already been placed in Brandon.

“It’s a pretty big step in getting into that organization,” Chiasson says. “To be a piece of that organization really means a lot. It’s an honour to have a chance to hopefully play there as a 16-year-old and bring some success to the team.”

In the meantime, he gets a Midget Prep season at Yale starting in the fall, where the 2018 HockeyNow Player of the Year for B.C. should give everyone plenty to talk about.

“I think Jake Chiasson is a professional hockey player, without question,” Rihela surmises. “As far as character, integrity and work ethic, I think Jake has to be at the top of the list. Players who have those attributes always find a way to make it.”

”He’s a Mr. Everything type-of-player who is very intelligent and makes the players around him better. He plays the game the right way and is the type of player you win with.”