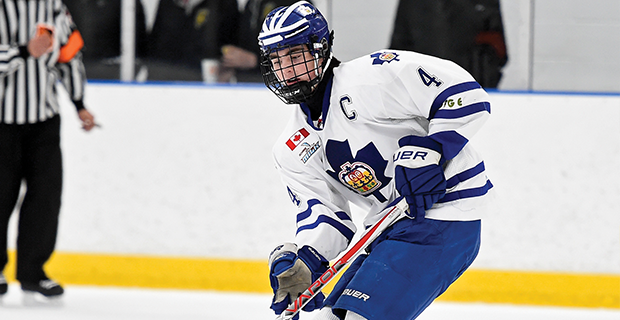 IT WAS AROUND THE TIME 2018 HOCKEYNOW ONTARIO PLAYER OF THE YEAR POWERED BY HOCKEYSHOT JAMIE DRYSDALE JOINED THE RUSH, SKATING BACKWARDS, THAT DAD GARY FIGURED HIS KID COULD PLAY

Did that just happen?

You can excuse fans and parents for asking that question, because it’s not something you see at the rink every day.

With his team breaking up the ice, 2018 Ontario HockeyNow Player Of The Year powered by HockeyShot Jamie Drysdale decided to join the rush... while skating backwards.

“I even remember when we were in Learn to Play. It was the first game they played,” recalls dad Gary Drysdale. “Jamie was playing forward. They were rushing up the ice and he decided to skate backwards up the ice beside the guy going ‘Pass it to me. Pass it to me,’ with a big smile on his face, loving it.”

Fast-forward to today, and the 16-year-old defenceman who played seven seasons in the Toronto Marlboros Minor Hockey program is heading to the Ontario Hockey League’s Erie Otters in the fall, taking the next stride in his progression. He was taken in the first round (fourth overall) by the Otters in the 2018 OHL Priority Selection, and was the first defenceman taken in the Selection.

He enters the Team Canada development stream later this month, joining 110 other young prospects at Hockey Canada’s Under-17 camp at WinSport’s Markin MacPhail Centre in Calgary.

“The biggest thing that separates Jamie from the pack is his skating,” answers Drysdale’s longtime Marlboros head coach Richard Power when asked about the skills placing the blueliner in elite territory. “He’s a one-of-a-kind skater. He makes it look effortless. He’s got that extra gear when he needs it.”

Given that strong skating is the foundation of any hockey success, Drysdale’s upward trajectory is as evident as it is inevitable.

“We’re not the same team without Jamie in the lineup, that’s for sure,” Power, who’s coached Drysdale for five years, insists. “He’s a leader on and off the ice for us.”

It had to start somewhere for the prodigious rearguard -- dad Gary had a backyard rink where Jamie would “chase his older brother around.”

Crediting his teammates and coaches, Drysdale is coming off what he says was his best experience to date, his Midget season in the Marlies program.

He sniped eight goals and added 42 assists in 57 league games this past season, culminating in a GTHL Minor Midget title for the Marlies. He added a goal and eight assists in six OHL Cup games.

You get the feeling success follows Drysdale around like a lost puppy.

Not a chance. It comes with hard work, dedication and a high level of commitment -- from himself, his parents, coaches and teammates.

“My team, obviously, has helped me so much,” Drysdale says. “They keep pushing me. At practice, like (coach Richard Power) would say to our team -- he’d say your hardest competition is going to be in practices because you are playing against the best players. All of my teammates pushed me hard at practice, so I wouldn’t be here without them or my coaches.”

Now Drysdale is bound for the heat and light of Major Junior with the Otters.

“Obviously, I’m a little nervous. But really excited,” Drysdale admits. “I’m so grateful to be drafted to the Erie Otters. A great team. A great organization.”

It’s a huge jump. Drysdale is going from playing with players his age, and several guys he’s been skating alongside since Tyke, to a new city in a new country in a league featuring players as many as four years older than he is.

It all starts this autumn in the fourth-largest city in Pennsylvania.

“There’s 100 per cent going to be a big learning curve. That goes for pretty much any player,” Power says of Drysdale’s transition to the pro-like atmosphere Major-Junior hockey brings. “And it will take some time. But he’ll adjust just fine.

“They say that’s where you separate them, up at that level," Power observes, adding, "I haven’t seen someone skate like Jamie in forever. He’s just -- wow.”

International Scouting Services Director of Scouting, Dennis MacInnis, doesn’t mince words when he details why the ISS has the 16-year-old defenceman at the top of this year’s class.

“Jamie is one of the elite defencemen in his age group. He’s able to control the game from the back end,” MacInnis says. “He has all the tools to be a No. 1 defender at the OHL level.”

For Drysdale’s dad, Gary, it’s all about Jamie’s progression. It’s about the journey more than the destination.

“We wanted to make sure that we were balanced, and that Jamie was balanced. It’s a long, long haul, so we didn’t want to get too far ahead. Have fun, and continue working on getting better. And if it happens, it happens.”

Jamie, among other things, just happens to be this year’s HockeyNow Ontario Player of the Year for 2018.