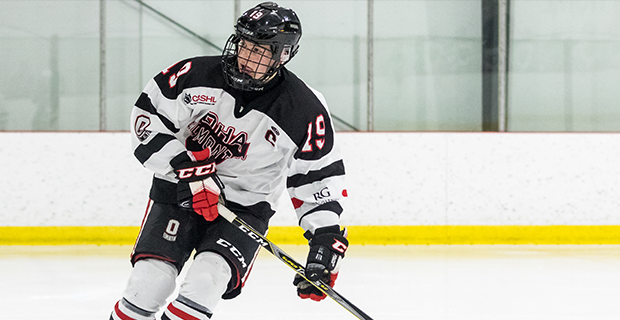 If anyone is ready for the trials, tribulations and relocations hockey’s next level brings, it’s Sean Tschigerl.

The Whitecourt product began skating at age three in the town located 180 kilometers west of Edmonton. Following his first couple of years in organized hockey, the 5-foot-11, 170-pound forward wanted to move up to a level the town of 10,000 wasn’t yet offering in its community hockey program.

“Sean wanted to play Pee Wee at the highest level, which meant we would have to move. So Sean, his brother, sister (who was entering first year university in Edmonton) and I moved to Edmonton where Sean played two years of Pee Wee AA for Edmonton North West Zone before joining OHA Edmonton for his first year of Bantam,” mom Tanya Tschigerl recalls. “My husband, Mike, stayed back in Whitecourt to work, and we have commuted back and forth on weekends since then.

“It has been a busy four years, but we have made it work.”

Tschigerl’s steady upward trajectory -- from Novice and Atom in Whitecourt to playing Bantam Prep in the CSSBHL for the OHA’s Edmonton team this past season -- has caught the attention of the hockey world.

He was taken fourth overall by the Calgary Hitmen in the 2018 WHL Bantam Draft following a 2017-18 CSSBHL season in which he scored 31 goals and added 39 assists in 30 regular-season games. To cap the season, his OHA Edmonton side won the CSSBHL Bantam Prep title. Tschigerl kicked it up a gear in the spring, scoring four goals and adding four assists in five tilts at the John Reid Memorial Bantam AAA Hockey Tournament. He also contributed three goals and three assists in five games for Team Edmonton Yellow at the Alberta Cup.

“The season was amazing,” 15-year-old forward recalls. “I had a great time with a lot of great friends. It’s something I’ll remember for a long time.”

His strong skating, cerebral hockey sense and commitment to two-way play placed him high on the WHL Bantam Draft list, with Calgary nabbing him early in the first round.

Being selected by Calgary is also something he’ll remember for a long time.

“It was a super-exciting moment. I was really just proud to be drafted. It was a super-humbling experience,” Tschigerl says. “I’m just really excited. I’m just looking for an opportunity to play there some day. I’m super looking forward to it.”

But it’s the skills you can’t coach -- the intangibles -- that set Tschigerl apart from other elite players his age.

“All of that skill is second to the type of kid he is,” Beissel says. “He’s an outstanding leader. His peers all look up to him and admire him. His compete level is through the roof.”

Beissel has coached for 25 years, watching his players such as Scotty Upshall, Jordin Tootoo, Joffrey Lupul and Brendan Guhle skate through the NHL portal. He’s coached Tschigerl for the past two seasons at OHA Edmonton.

“I’ve never seen a kid so professional in his preparation -- the way he prepares himself,” Beissel says. “The standards he has for himself are through the roof. I don’t see him being happy until he plays in the National Hockey League. He’s capable of that.”

“Sean plays a very mature game and is very consistent and reliable,” Parker says. “He has a nice mix of size and skill, and always seems to be around the puck. A really smart player who does everything well.”

Skating since he was three, Tschigerl is clear about the positive influence of the key people who put him in a position to be selected as a HockeyNow POY.

“The coaches are great. They give you that confidence. They help you. They teach you. That’s just big.”

Big enough to be the Hockey Now 2018 Player of the Year for Alberta.