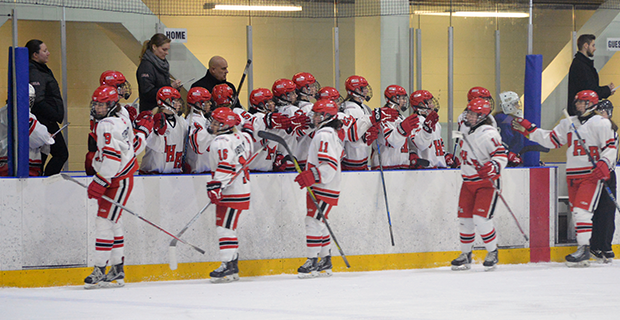 AS THE PUCK DROPS on a newCanadian Sports School Hockey League season,  Katie Greenway will be calling the shots for the Okanagan Hockey Academy (OHA) Female Prep team. An assistant coach with the club last season, Greenway steps up to the head coach’s role this year.

“Moving Katie into the role of head coach was an easy decision for us,” said Dixon Ward, vice-president of the Okanagan Hockey Group. “She brings a high level of motivation and energy, and did an exceptional job last season as an assistant coach. We look forward to seeing Katie work with our female student athletes and assist in their development off and on the ice.”

Prior to coaching at OHA, Greenway, 26, was a student athlete for both the University of B.C. and St. Francis Xavier women’s varsity teams. She was twice named an academic all-Canadian, while compiling a U Sports  career goaltending record of 33-8-0, which included a second-place finish at the 2011 U Sports women’s hockey championship. During the 2013-14 season, she was the starting goaltender for the ZSC Lions Frauen A team in Zurich.

Along with coaching OHA, Greenway will be an assistant coach for Team B.C. at the 2019 Canada Winter Games in Red Deer in February.

Joining Greenway on the OHA bench this season is long-time coach and former NHL defenceman Blake Wesley, who will serve as an associate coach and female coach mentor. Wesley, 59, has been a part of the OHA coaching staff since 2004.

Class will be in for a new CSSHL member next season, as the league is adding Okanagan Hockey Ontario beginning in fall 2019, bringing the league membership to 22 programs.

Located in Whitby, Ont., Okanagan Hockey Ontario’s primary focus is to promote the long-term development of each of its athletes in the classroom, on the ice and in the community. Students will attend Henry Street High School.

Okanagan Hockey Ontario will field one team at the U18 AAA level.

“Being able to align ourselves with a league like the CSSHL is very exciting,” said Andy Oakes, president of the Okanagan Hockey Group. “The CSSHL has an outstanding history of developing not only good hockey players, but good people. We can’t wait to get going with some events this upcoming season and begin league play in 2019-20.”

To get the program some early exposure, Okanagan Hockey Ontario is expected take part in four-to-five CSSHL eastern events this upcoming season.