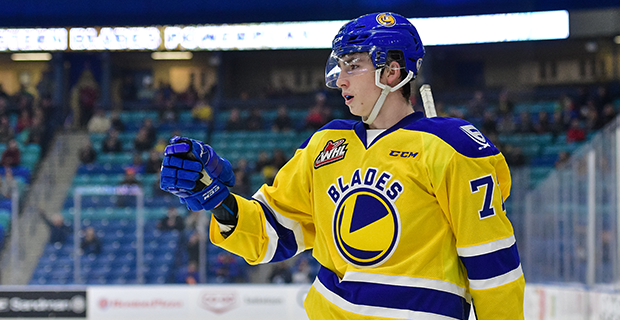 Saskatoon Blades sophomore centre Kirby Dach is a pivotal piece in the club’s push to return to the WHL playoffs this season. (Steve Hiscock/Saskatoon Blades)

GET READY for a sophomore surge.

The Western Hockey League’s  hottest second-year players are set to take the season by storm after leading Canada to a gold medal in a perfect run at the Hlinka Gretzky Cup  last month. Here’s a breakdown of what a few of those rising stars have to offer their respective teams as they enter their NHL draft year:

Kirby Dach (C, Saskatoon Blades): After missing out on the playoffs in each of the past five seasons, the Saskatoon Blades are finally ready to make a serious push for the Eastern Conference’s top eight — and Kirby Dach is sure to be a key factor in their potential success.

The 6-foot-4, 181-pound centre led Canada’s crop of 11 WHLers at the Hlinka Gretzky Cup with seven points over the five-game tournament after putting up seven goals and 39 assists in 52 games with the Blades last season.

The second overall pick from the 2016 WHL Bantam Draft benefitted from an early start when the Blades were forced to call on him for 19 games as an affiliate in the 2016-17 season. Starting his Dub career at just 15 years old, Dach still managed to put up 10 points before surging into his official rookie season.  Now 17, the Fort Saskatchewan, Alta., product will be out to climb the NHL draft rankings while filling a key leadership role on an up-and-coming Blades roster.

Dylan Cozens (C, Lethbridge Hurricanes): Dylan Cozens exploded onto the WHL scene as an affiliate in the 2017 post-season. Then just 16 years old, Cozens helped the ’Canes to the Eastern Conference final with three goals and five assists in 12 playoff contests — including five points in a seven-game series victory over the Medicine Hat Tigers in the second round. The 6-foot-3, 177-pound centre carried that pace into his official rookie campaign, leading all WHL newcomers with 0.93 points per game — for a total of 53 over 57 contests — before adding 13 points in yet another run to the Eastern Conference final. Cozens went on to add two goals and three assists over five games at the Hlinka Gretzky Cup. Expect big things from the Whitehorse product this season.

Josh Williams (RW, Medicine Hat Tigers): Selected at fifth overall in the 2016 WHL Bantam Draft, Josh Williams is the highest pick the Medicine Hat Tigers have seen in well over a decade, and he’s poised to make a monumental impact with the orange and black this season. While he was held off the scoresheet in Canada’s opening 10-0 victory over Switzerland at the Hlinka Gretzky Cup, Williams ended up leading his country with five goals — alongside Rimouski Oceanic left-winger Alexis Lafrenière — while making a massive impact in elimination play. The 6-foot-1, 185-pound right winger potted two goals, including the overtime winner, in Canada’s thrilling 6-5 semifinal victory over the United States before adding a key insurance marker in a 6-2 gold-medal win over Sweden. Williams played a significant role with the Tigers last season, logging 11 goals and nine assists in 47 games, but with plenty of outgoing veterans and even more scouts to impress, Williams’ role is sure to grow with the Tabbies this year.

Peyton Krebs (LW, Kootenay Ice): After going first overall in the 2016 WHL Bantam Draft, Peyton Krebs entered his WHL career with some lofty expectations — but the 17-year-old Okotoks, Alta., product has been meeting them all with the Kootenay ICE. After leading all WHL rookies with 54 points last season, Krebs played a key role in Canada’s gold-medal run at the Hlinka Gretzky Cup. The 5-foot-11, 162-pound left winger logged a point-per-game average at the five-game tournament, including two goals and an assist in Canada’s opening 10-0 blowout over Switzerland, and the assist on Williams’ 6-5 semifinal overtime winner against the United States. Krebs has already been filling a leadership role on the rising ICE roster, and will likely be leaned on heavily as their go-to guy up front this season.

Luke Toporowski (LW, Spokane Chiefs): While American Luke Toporowski was forced to settle for fourth after his team fell to Russia in the Hlinka Gretzky Cup bronze-medal game, the Bettendorf, Iowa, product still made his mark on the world stage. Toporowski led his team with four goals at the tournament — including a late go-ahead goal against Canada in his team’s eventual semifinal loss — while adding an assist to close out the event at a point per game. The 5-foot-11, 179-pound left winger posted double digits in both scoring categories with the Spokane Chiefs last season — finishing his rookie campaign with 10 goals and 13 assists in 61 games — and is likely to make the most of his increased ice time with the team this year. 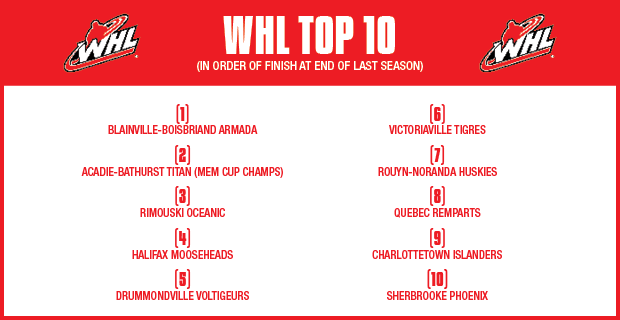