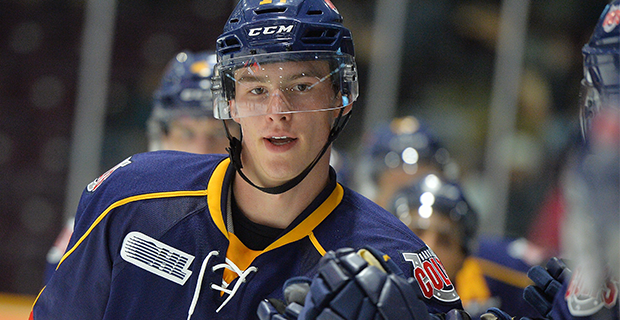 The Canadian Hockey League has a reputation for developing the best and brightest players up for grabs each year in the NHL Entry Draft, and this year was no exception.

Leading the way, of course, was Andrei Svechnikov, the dynamic Russian forward who went second overall to the Carolina Hurricanes.

Between all three Major-Junior leagues under the CHL umbrella, there was no shortage of players taken in the first round, as you’ll see below.

One of the NHL’s younger teams that could break through at any moment, the Hurricanes gained huge ground at the NHL Entry Draft Lottery in April, moving up nine spots to second overall.

Their prize was the uber-talented Svechnikov, who has a well-rounded game in terms of his speed, power and finesse.

He scored nearly a goal a game last season with the Colts, and his presence will likely be felt throughout the NHL next year.

After a run to the OHL finals with the Sault Ste. Marie Greyhounds, Hayton was a surprise pick by the Coyotes at fifth overall.

He was one of the top three centres eligible in the draft, but was ranked 12th by ISS.

Next season, we could see him grow into one of the most effective two-way forwards in the OHL.

The Red Wings got away with the first steal of the draft.

Considered one of – if not the – purest goal scorers eligible for the draft, many felt Zadina would have been a top-three pick.

While he had a great season with the Mooseheads, he was also dominant for the Czech Republic as a World Junior tournament all-star.

The Oilers grabbed a cerebral defender with a booming shot with their first-round pick.

When the London Knights decided to build more for the future, they traded away many of their stars, but made sure to hold on to Bouchard and make him team captain. Bouchard had a dominant season, leading all CHL defencemen with 87 points.

They may have lost John Tavares on the opening day of NHL free agency, but the Islanders were one of the most active teams at the draft, with four picks in the top-50.

One of those selections was Dobson, a highly sought after defenceman who helped the Titan win their first ever Memorial Cup in May. For his efforts, Dobson was also named a Memorial Cup all-star.

Another early surprise pick from the OHL, Dellandrea wasn’t ranked in ISS final top 31 list, but was off the draft board when the Stars took him 13th overall.

Dellandrea was a bright spot on a poor Flint Firebirds team that finished second-last in the OHL. His 59 points were two back of the team lead.

The Devils looked out west in an effort to boost their defensive core.

Although still on the smaller side of the scale, Smith is known best for his skating ability and put up a remarkable 73 points in 69 games with the Spokane Chiefs.

He is also a former HockeyNow Hockey Player of the Year for Alberta.

Arguably the best natural athlete in the draft, Foudy skyrocketed up the NHL Draft rankings this year, and although he wasn’t ranked within ISS’s top 31, the Blue Jackets had no concerns drafting him 18th overall.

He was a last-minute addition to the CHL/NHL Top Prospects and was called upon by Team Canada for the World U18 Championships as well.

The Sharks are taking a chance on Merkley, the highly skilled defenceman who probably could have gone in the top 10 if teams weren’t concerned about his defensive flaws and reported off-ice issues.

Still, there’s no denying his talent, and the Sharks will work with him to iron out his flaws. He could be a steal if that happens.

The Blackhawks boosted their prospect pool on the defensive side in the draft, first by taking highly touted Swede Adam Boqvist eighth overall before selecting Beaudin with the 27th pick.

Beaudin can push the pace in a game with his speed, vision and playmaking abilities. Last season, he led the Drummondville Voltigeurs with 69 points.

Heading into the draft, there was a lot of chatter about the Leafs using their pick to take Sandin. The Swedish defenceman spent last season with the Sault Ste. Marie Greyhounds, a club Leafs GM Kyle Dubas is very familiar with. Sandin brings a strong two-way game that will eventually allow him to fit in nicely in the NHL.

The first overall pick in the 2015 QMJHL Draft was expected to be a mid-first-round selection in the NHL Entry Draft, but slid all the way down to 30th.

However, the Red Wings may have gotten another steal in the draft as Veleno’s quickness and size could help him contribute in the NHL sooner rather than later.

There were a lot of small, offensive-minded defencemen chosen in the first round, but Alexeyev isn’t one of them.

The Washington Capitals took the big Russian who is known as more of a physical defender, but is also effective at distributing the puck out of his zone.