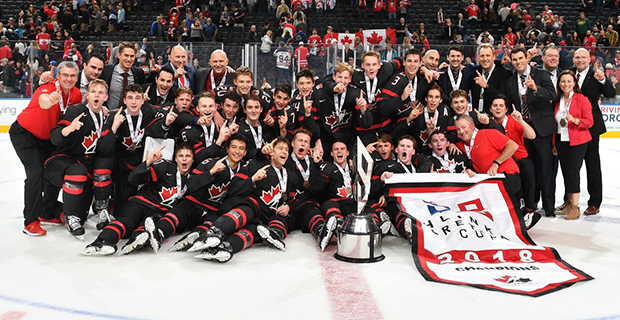 Somewhere in that pile of Team Canada hockey humanity is 2016 HockeyNow Alberta Player of the Year Bowen Byram of the Vancouver Giants, who was one of 11 WHL players helping Canada win the Hlinka Gretzky Cup international U18 tournament in Edmonton. Canada defeated Sweden 6-2 in the Aug. 11 final. (Team Canada photo)

LEAGUE
Count HockeyNow 2016 Player of the Year for Alberta Bowen Byram as one of the elated Team Canada members celebrating gold at the Hlinka Gretzky Cup tournament in Edmonton earlier this month.

The Vancouver Giants defenceman was one of 11 Western Hockey League players to help Canada win the prestigious international tournament for U18 players. He scored a goal and added three assists at the event.

Canada’s undefeated run at the Hlinka Gretzky tourney saw the team capture top spot in Group A during preliminary action, skating to a 3-0 record, before defeating Team USA 6-5 in a semifinal OT thriller.

KOOTENAY ICE
The ICE have acquired 20-year-old centre Jaeger White from the Medicine Hat Tigers for a conditional draft pick.

White is expected to provide an immediate boost to the ICE’s forward group. The 5-foot-9, 175-pound centre contributed 10 goals and 24 helpers in 68 games with the Tigers last season.

Selected by the Lethbridge Hurricanes in the fourth round (72nd overall) in the 2013 WHL Bantam Draft, White has appeared in 152 WHL regular-season games, recording 15 goals and 39 assists. In six career WHL playoff games, all played last season with the Tigers, the Medicine Hat native carded two goals and four assists.

“We would like to thank Jaeger for his valuable contributions to the Tigers organization on and off the ice, and wish him all the best with his new team,” said Shaun Clouston, Tigers head coach and general manager.

The ICE made the announcement Aug. 14.

MOOSE JAW WARRIORS
The Warriors have bolstered their forward ranks with a pair of highly regarded imports.

The team has announced that 17-year-old Belarusian players Daniil Stepanov and Yegor Buyalsky have committed to the Warriors for the upcoming season.

Stepanov, a 6-foot, 175-pound centre was selected by the Warriors in the first round(52nd overall) in the 2018 Canadian Hockey League Import Draft. Stepanov played last season with Team Belarus U18 and had three goals and 17 assists in 31 games. He was an underage player for Belarus at the 2018 IIHF World Under-18 Championships held in April.

Buyalsky, a 6-foot, 165-pound forward, was taken 77th overall by the Warriors in the 2018 CHL Import Draft. The right winger spent last season with Team Belarus U17 and had 19 goals and 29 assists in 49 games.  He was a member of Belarus’s team that competed at the Mac’s Midget AAA World Invitational Tournament in Calgary, and finished the event with five goals and an assist in six games.

Stepanov and Buyalsky are in Moose Jaw preparing for the team’s 2018 training camp, which opens August 22.

The Warriors made the announcement Aug. 13.

SWIFT CURRENT BRONCOS
The Broncos have filled out their coaching staff for 2018-19, including adding a homebrew to the mix.

Brandin Cote and Scott Dutertre are joining the club as assistant coaches under head coach and director of jockey operations Dean Brockman. They join Brockman behind the bench this fall.

Born and raised in Swift Current, Cote brings a comprehensive coaching resume to the Broncos. He was an assistant coach for the WHL’s Prince Albert Raiders in 2016-17, and is currently an assistant for the Team Alberta U16 club ahead of the 2019 Canada Winter Games going this February in Red Deer. Cote was the head coach of the Red Deer Optimist Chiefs Midget AAA Hockey Club from 2014-2016.

“My family and I are extremely excited and honoured to join the Swift Current Broncos.” Cote said. “I was born and raised in Swift Current, and to have the opportunity to come back to the city where my love and passion for the game all started is an amazing feeling.”

Over the past four seasons, he was an assistant coach for the University of Saskatchewan’s men’s and women’s hockey programs, reaching the national championship on four occasions.

The Broncos made the announcement Aug. 13.