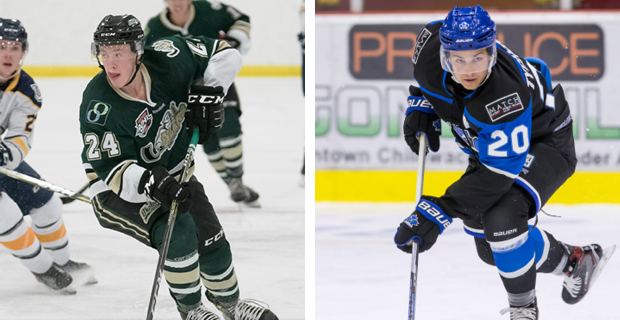 For the third year in a row, a Junior A player from Canada has been selected in the first round of the NHL Draft, further cementing the strength of the Canadian Junior Hockey League (CJHL) talent.

After Jacob Bernard-Docker was chosen 26th by the Ottawa Senators on the first night of the draft, the next CJHL player also went to the Senators on Day 2, as Jonathan Tychonick heard his name called.

Two players were selected in the third round – big centre Jack McBain to Minnesota and defenceman Seth Barton to Detroit. The fourth round saw another two players chosen, this time teammates, as Wenatchee’s Stanislav Demin is now property of the Vegas Golden Knights and Oregon-native Jasper Weatherby stays on the West Coast with San Jose.

Bernard-Docker was the top-ranked CJHL skater in the ISS rankings, coming in at No. 25, one spot higher than he was selected. After Ottawa initially traded down from 22 with the New York Rangers, they declined another offer or two and stuck with their guy.

After a high-scoring campaign with the AJHL’s Okotoks Oilers that saw him lead one of the league’s top teams and notch over 20 goals, Bernard-Docker watched his stock climb for most of the year. He’s also been named to Team Canada’s World Junior Development Camp roster.

In Round 2, the Senators used their pick gained from trading down in Round 1 to nab Tychonick, who has a lot of familiarity with JDB – the two played together at the World Junior A Challenge (WJAC) for Team Canada West as D-partners, and both are incoming freshman to the University of North Dakota where they are expected to pair up once again.

Tychonick came from the heralded Penticton Vees and resisted the Major Junior offers after being a first-round choice in the WHL in 2015. Last year, he captured a BCHL championship, and this year, he was named a First Team All-Star. Tychonick also has back-to-back appearances at the WJAC.

A tall centreman with NHL pedigree following his father, Jack McBain is Minnesota-bound. Heading to Boston College next year, McBain has played with Team Canada at three different tournaments and was also named the OJHL’s top prospect after his 58-point season with the Toronto Jr. Canadiens.

For the second year in a row, the Trail Smoke Eaters of the BCHL had a player selected, as Seth Barton heads to the Red Wings. The third-rounder turned heads in his first full Junior A campaign and expects to suit up on the East Coast with UMass-Lowell in the fall.

The draft was special for a pair of teammates of the BCHL and Doyle Cup-champion Wenatchee Wild, as Stanislav Demin and Jasper Weatherby were chosen three picks apart in the fourth round.

Demin is now part of the Sin City franchise, not far from his hometown in the Long Beach area. The smooth-skating defender upped his goals and points with the Wild from last year and is set to skate for the University of Denver in the fall.

Entering his third year of eligibility, Weatherby tore up the BCHL to win the scoring race with 74 points in 58 games, plus a mind-boggling 38 points in 20 playoff matches. He’ll be a freshman at the University of North Dakota with Bernard-Docker and Tychonick.

The Ottawa Senators seemed to aim their scouting at the Junior A ranks, specifically in Western Canada, as they chose Angus Crookshank, a late-born 1999. He tied for the team lead in goals with 22 and was second in points. At the WJAC, Crookshank had five points enroute to the gold medal. He’s off to the University of New Hampshire this year.

The OJHL’s next draftee went to the Boston Bruins via the Pickering Panthers as Dustyn McFaul went in the sixth. He’s still likely got another year in the OJHL before he joins Clarkson of the NCAA in 2019. At the beginning of the year, McFaul wasn’t able to crack the OHL’s Kingston Frontenacs, so he turned to Junior A – a decision that’s been great in hindsight.

Stapley, a 1999-born skater, spent the last three years with the Vernon Vipers of the BCHL, totalling 121 points in 154 games. This year, he ranked 15th in league scoring and second on the Vipers. The Montreal draftee at the start of the seventh is taking his talents to the University of Denver next season.

In the final round, teams started taking fliers on goalies, first Vancouver on Steinbach’s Matthew Thiessen. He won the MJHL title with the Pistons and had the league’s best GAA along with an All-Rookie Team honour, but has decided to join the United States Hockey League’s (USHL) Dubuque Fighting Saints, according to The Province.

Ty Taylor of Vernon went to the Tampa Bay Lightning 22 picks after Thiessen, and the second-year starter could be a diamond in the rough. Last year, he had a sparkling 1.87 GAA and .931 save percentage. With another run on a strong Vernon team, Taylor will then head to the University of New Hampshire in the fall of 2019.

Thanks to a disruptive CJHL Top Prospects game, Okotoks Oilers forward Austin Wong found himself a member of the Winnipeg Jets organization. He’s a skilled, rugged forward, as evidenced by his 25-goal, 235 PIM season (tops in the AJHL), but has plenty of both hockey and off-ice smarts – Wong is committed to Harvard for 2019.