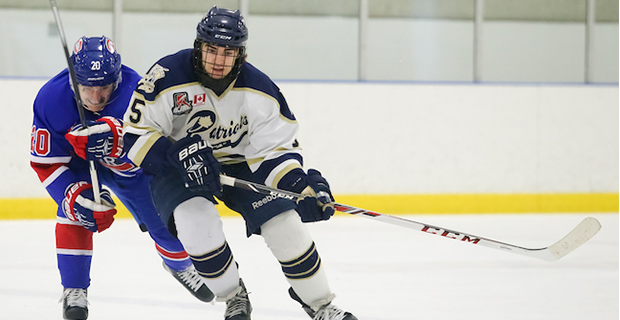 TORONTO PATRIOTS
Toronto Patriots defenceman Graeme MacLean will be skating with the Laurier Golden Hawks beginning this fall. The Golden Hawks play in the U Sports  OUA Division.

The 5-foot-11, 180-pound Thornhill, Ont., native played for the Patriots the past two seasons, where he racked up 14 goals and 39 assists in 105 regular-season games.

Prior to that, the defenceman played in the Ontario Junior Hockey League for the North York Rangers, Milton Icehawks and Toronto Jr. Canadiens following two seasons of Midget AAA play with the Toronto Red Wings.

The league made the announcement July 31.

AURORA TIGERS
Aurora Tigers defeceman Matthew Ferrari has confirmed his commitment to join the York University Lions beginning in the fall. The Lions play in the U Sports  OUA Division.

Ferrari had four goals and 21 assists in 40 games with Aurora last season.

The Woodbridge, Ont., blueliner joined the Tigers for the 2017-18 season after splitting the previous season between the Acadie-Bathurst Titan of the Quebec Major Junior Hockey League and the OJHL’s North York Rangers.

The 6-foot-2, 190-pound 20-year-old played his first two seasons in the OJHL with the Toronto Jr. Canadiens, where he posted five goals and 34 assists in 79 games.

Russ Herrington, who coached the Markham Waxers in the OJHL, is head coach of the York Lions. His assistants include former OJHL player Jesse Cook (Mississauga, Brampton).

There were 11 former OJHL players on the York roster last season.

The league made the announcement July 23.

The Coyotes are confident they got the right man for the job(s).

"I believe the most important part of my role is to recruit talented people," said Coyotes President of Hockey Operations and General Manger John Chayka. "Lindsay is a best-in-class talent evaluator that will be an asset to our entire organization and complement the existing infrastructure we have in place."

Hofford, 55, coached the OJHL's Bramalea Blues from 1996-99, winning the league and Dudley-Hewitt Cup Central Canadian championships in 1999. The Blues went 106-28-16-3 during Hofford’s three seasons in Bramalea.

He also coached for six years in the Canadian Hockey League with the London Knights and Lethbridge Hurricanes.

“For me, I see it as it's onward and upward for the Coyotes,” Hofford said on the team’s Twitter feed. “There's good young players here and a good mix of younger and older staff members, and just a ton of potential, and I think we all saw that at the end of last season.”

The Woodbridge, Ont., native has also served as Director of Hockey at the Hill Academy in Vaughan, and has worked as an amateur scout for the Toronto Maple Leafs since 2015.

He joins the Coyotes with more than 25 years of coaching and professional scouting experience.

The league made the announcement July 24.