Around the CCHL: Lumber Kings D-man Vroman commits to NCAA Div. 3 Stevenson U; Hawks forward Belec off to UOIT 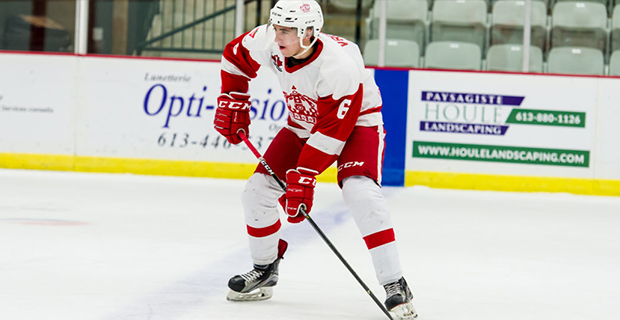 PEMBROKE LUMBER KINGS
Lumber Kings defenceman Jarrad Vroman is stepping up to NCAA Div. 3 play this season after committing to play for the Maryland-based Stevenson University Mustangs this autumn.

The 6-foot-4, 172-pound Lincoln Park, Mich., native played midget in Michigan where he racked up 15 goals and 50 assists over two seasons.

Vroman’s Lumber Kings teammate, forward Jacob Kamps, is also headed to the next level. He’s joining the Ryerson University Rams U Sports squad in Toronto for the 2018-19 season.

The 21-year-old Pickering, Ont., product suited up in 38 games with Pembroke this past season, notching 17 goals and 18 assists. In 60 career games with the Lumber Kings, Kamps registered 25 goals and 26 assists.

HAWKESBURY HAWKS
Hawks forward Kari Belec is moving on up to play for the University of Ontario Institute of Technology Ridgebacks in Oshawa this fall.

Prior to the CCHL, Belec skated for Stanstead College in Quebec and with the Moncton Flyers Midget AAA program in New Brunswick.

CORNWALL COLTS
Colts goalie Liam Lascelle will be stopping pucks in the NCAA this season.

The CCHL’s top goaltender in 2017-18, Lascelle is joining the NCAA Div. 3 Hobart College Statesmen based in Geneva, N.Y., this autumn.

The 5-foot-10, 165-pound Cornwall, Ont., native earned CCHL top-goaltender honours this past season, while also being named to the first all-star team and all-graduate team. He was also named a finalist for the Canadian Junior Hockey League’s top goaltender award.

Prior to joing the Colts, he played in the Ontario Hockey Academy Mavericks Midget program in Cornwall.