Around the BCHL: Grizzlies forward NCAA-bound, Capitals forward off to Wisconsin-Superior 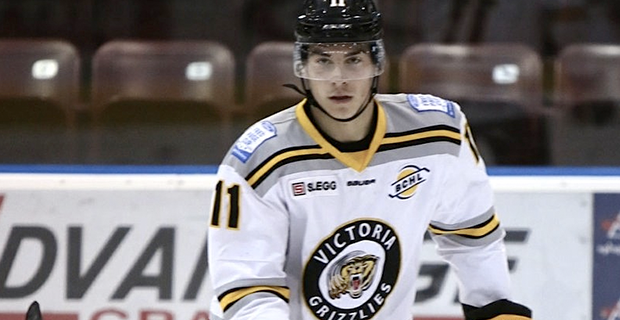 Michaelian has committed to play at Ferris State University (FSU) in the fall in his native Michigan. His twin brother, Brendon, is playing at Robert Morris University in Pittsburgh starting this autumn.

Justin Michaelian, a 6-foot, 185-pound forward, scored 24 goals and added 20 assists in 48 games with the Grizzlies this past B.C. Hockey League season. He leaves the BCHL having carded 31 goals and 36 assists in 101 total games.

Michaelian joins Wenatchee Wild blueliner and 2018 BCHL Top Defenceman Cooper Zech, as both were recruited to Ferris State for the coming season.

The Grizzlies made the announcement July 17.

The Kanata, Ont., native posted 13 goals and 25 assists in 58 games for the Caps last season as the team’s captain. His 25 helpers tied him for second-most on the team.

At Wisconsin-Superior, MacTavish will join a Yellowjackets hockey program that competes in the NCAA’s Div. III Wisconsin Intercollegiate Athletic Conference (WIAC). The other teams in the WIAC men’s hockey loop are UW-Eau Claire, UW-Stevens Point, UW-Stout and UW-River Falls.

MacTavish becomes the first BCHL alum on the Yellowjackets roster, as UW-Superior did not have a player from the league last season.

The Capitals made the announcement July 5.