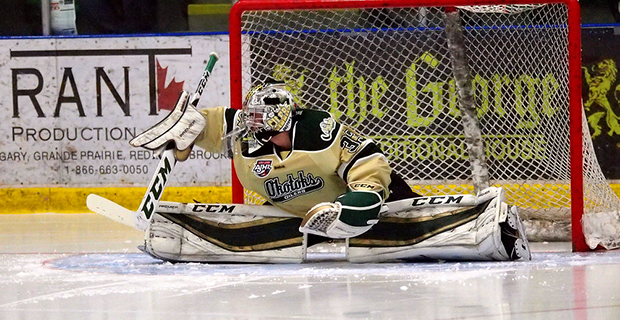 OILERS STEP UP TO CANADIAN UNIVERSITY RANKS
Okotoks Oilers goalie Riley Morris is suiting up for the Mount Royal University Cougars this fall, as the netminder has committed to play for the U Sports squad.

Oilers defenceman Kylor Wall, meanwhile, is joining the University Nipissing Lakers, as both 1997-born Oilers players move up to the next level.

In the 2017-18 Alberta Junior Hockey League season, Morris had a record of 31-2-2 with a goals-against average of 1.98 and a save percentage of .922, with four shutouts and five assists. His performance won him the league’s Top Goaltender Award. He was also named the Canadian Junior Hockey League’s Goalie of the Year. The 5-foot-11, 200-pound Hockey Calgary product had a 9-6 record with a 2.18 goals-against average and a .918 save percentage in the 2018 Inter Pipeline Cup playoffs, where he helped lead the Oilers to their first South Division crown and appearance in the AJHL Championship.

Wall, 20, accumulated 13 goals and 20 assists in 46 games with the Oilers, and recorded a goal and four assists in 13 playoff games.

Acquired in a trade in the 2017 off-season, the 6-foot-2, 210-pound defenceman previously played with the Calgary Mustangs, where he served as the team’s captain and played three seasons, posting 15 goals and 29 assists in 161 games.

The Oilers made the announcements July 20.

CALGARY MUSTANGS FILL THE BENCH
Alberta Junior Hockey League Coach-of-the-Year finalist Tyler Drader is back behind the bench with the Calgary Mustangs this season. The team has also announced assistant coach Matt Clarke is returning to the team. The contract extensions for both coaches run through the 2018-19 AJHL season.

"We are extremely happy to be able to bring both Tyler Drader and Matt Clarke back for another year," newly named Mustangs President of the Board Darryl Robinson said. "The two of them are perfect examples of being ‘a player's coach,’ proving that when you give players respect, you will get back respect from them."

Following the extensions of Drader and Clarke, the ‘Stangs then filled the bench with the hirings of Alex Mandolidis, Josh Watson and Richie Hubbell to round out the team’s coaching staff.

Mandolidis and Watson join the Mustangs after several years in the Alberta Midget AAA ranks. Watson has most recently been part of the coaching staff for the Calgary Buffaloes Midget AAA club, while Mandolidis has spent the past five seasons in various roles as head coach or assistant with the Calgary AAA Flames and AAA Northstars associations. Hubbell has most recently been with Olds College as goalie coach of the women’s hockey team in the Alberta Colleges Athletic Conference, while running his own performance clinics.

Along with firming up the team’s coaching staff, the ‘Stangs announced the return of athletic therapist Kate Exley and intern Evan Li, who’s moved up to be the Manager of Communications, Media and Statistics for the club.

The team made the announcements July 22.