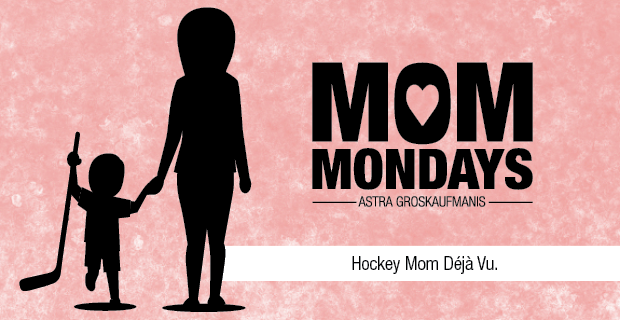 How often have you run into someone in a store or in a restaurant, politely say “Hi” and then wonder, “Where do I know them from?” They look familiar but you can’t quite place them. It drives you crazy and you wrack your brain the rest of the day trying to figure out where you’ve met them before.

When I put two and two together and figure out how I know that this or that person, nine times out of ten I realize I know them through hockey. This should surprise no one since hockey has been the fabric of my social life for seventeen seasons!

The other day I was paying for my purchases at the cash of our local hardware store and thought the cashier looked very familiar. As I took out my wallet she asked, “So, is Emily still playing hockey?” Of course! This cashier was on Emily’s team some years ago. In fact, it was many years ago. They played on the same team their first year Peewee, and my daughter just finished her last midget year. Clearly I haven’t changed a bit! She, on the other hand, had certainly grown up quite a bit since her size 4 hockey skates.

I had a long chat with someone at the gym a while back and I just assumed I knew them through the classes we took at GoodLife. Then she starts reminiscing about a tournament in Kingston where both our boys went missing for a couple of hours. Oh, right! Our shared history goes way farther back than Pump class!

My husband and I were at a restaurant recently and we kept exchanging glances and imaginary thought bubbles with another couple:  “I know I know you, but how …?” By the time we’d finished our meal, I’d figured out which hockey team, which season, and which of my kids had played with their kid. We went over to their table and reminisced briefly about our boys before leaving, and heading off to the next hockey mom déjà vu.

Since becoming a hockey mom, these scenarios have played themselves over and over in my life. There are plenty of years where my kids were on teams and I shared the hockey mom role with moms I’ve known for several years – my repeat hockey moms – the ones that have become part of my family for life. For other years though, there are hockey with whom I share only a single hockey season. These are my one-timers and whose names and connections I might briefly forget … but not for long.

Three cheers for the people that you meet – especially those met through hockey.