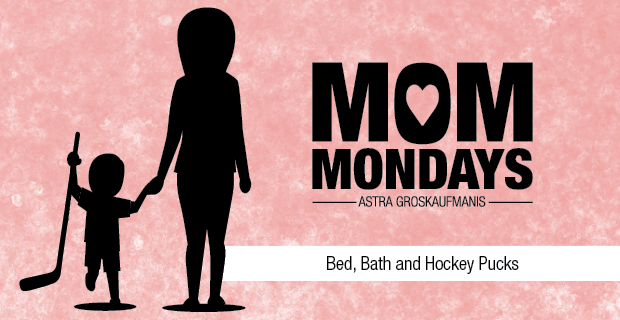 I worked from home the other day. My daughter was having her wisdom teeth removed and though she did sleep most of the day, someone needed to be close by to keep an eye on her and bring her the obligatory ice packs, meds, and heaping bowls of ice cream as instructed. I don’t often get to work from home so when I chose to do so this day, I first had to clear my desk of the mountain of paperwork that I had deemed important at one point, but is now probably irrelevant (or overdue).

As I sat down at my desk with my laptop, I moved two hockey pucks away from my work space. Then I grabbed the stapler off my husband’s desk and noticed there was a puck on his desk too. There was a hockey puck on the staircase. There were two more pucks on top of the washing machine, and yet another on the kitchen window sill.

It appears we have random pucks all over the house. There is a puck on the kitchen table, as proud as a pretty little centrepiece. We don’t even eat in the dining room anymore but there is a puck on the dining room buffet table. There are pucks on the kids’ dressers. There’s a puck in the kids’ bathroom next to the toothpaste. Every single room in our house has a light switch and a hockey puck.

I know there is probably a bucket of pucks in the garage but that’s where most people expect to find them. We seem to have hockey pucks all over the house. It’s like they’re our family’s décor essential. I have no idea how long some of them have been sitting where they are. Until this day, I didn’t even seem take notice of them (clearly, I don’t notice them if there are pucks adorning my kitchen table!).

We seem to collect pucks like some people collect coffee mugs from exotic Starbucks locations. However instead of Starbucks New York City, I have Bell Sensplex Player of the Game. I guess this is to be expected of a hockey family. I know my hockey mom friends understand. Is this what their house is like too? Pucks in every room?

I am often envious of other people’s interior design savvy and often comment on their lovely décor. “Oh,” they often say, “Just a little something I picked up at Pier One!” No one has really been commenting on my lovely home décor these last few years... these last few seventeen years as a hockey mom. Somehow, “Oh, just a little something I picked up at the Kingston tournament” just doesn’t have the same ring. I think I need to start creating sculptures out of all these hockey pucks. Our own hockey puck totem or inuksuk!