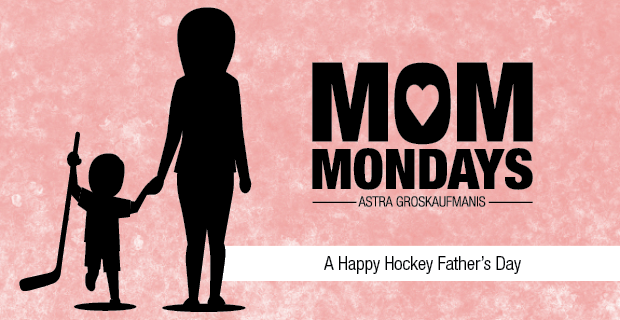 Happy Father’s Day to all the hockey dads! Today is a special day for you. I normally write about all things hockey mom but for this special occasion, I thought I would celebrate the joys of being a hockey dad. Hockey dads have their own unique place in the hockey world and even though this is written from a hockey mom’s perspective, here are my top ten reasons that it’s great to be a hockey dad:

10. Hockey dads can generally interpret the referee’s hand signals better than hockey moms. They know right away that the official is calling a high sticking penalty rather than practising the merengue. This is a great resource to have in during a hockey game.

9. On those rare occasions that hockey dads sit in the bleachers as opposed to along the glass, they don’t mind moving over and giving up the warm spot for their wives. Hockey moms generally covet this newly warmed up spot, and share their hockey blankets only with other hockey mom.

8. Hockey dads don’t mind doing the coffee run, provided there’s enough time before the puck drop and providing the hockey mom doesn’t mind getting a tea instead of a double-double with milk.

7. Hockey dads don’t mind being the Official Skate Tie-er and, in fact, take this role very seriously. I’m only called upon to serve in this capacity in the most dire of circumstances (Dad can’t be at the game and there are literally no other hockey dads or granddads around).

6. Hockey Dads don’t see the problem with a Slushie and hot dog an hour before dinner. They simply don’t comprehend the issue with French Fries for breakfast. They do, however, totally understand the need for a hot chocolate after a tough loss.

5. Hockey Dads are gifted bluffers. They’re the first to see your 9PM game and raise you a 6AM practice. I know. I’ve fallen for a few of these. A hockey mom’s weakness is her gullibility.

4. Somehow being a hockey dad makes the argument for buying a pick-up truck totally legitimate even though all the equipment fits fine in your current vehicle. Somehow hockey dad van doesn’t have the same ring.

3. Skating and playing advice from hockey dads does not get the usual eye roll response. Even though neither of us played hockey as kids, my kids will always take their hockey dad’s advice seriously.

2. Hockey dads are gifted negotiators. Only a hockey dad can get out of doing chores because he has to flood the backyard rink.

So whether you’re being served puck-shaped pancakes in bed today, unwrapping a brand new NHL logo tie, chatting up the NHL draft with your kids, I hope you had the happiest of Father’s Days with your hockey family.

Three cheers for all the hockey dads out there – and for their special Hockey Father’s Day!