Minor Hockey Changing for LGBTQ Players, But Plenty Still to Be Done 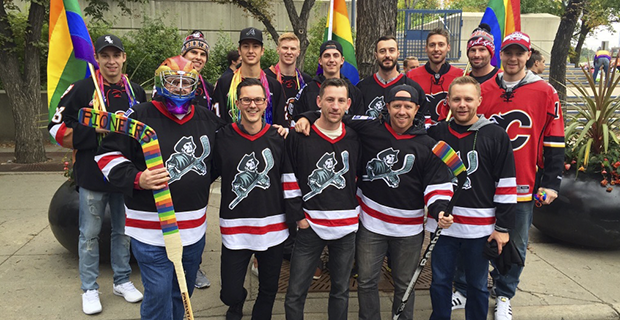 Justin Connelly (front, right in group photo) is a You Can Play Ambassador and member of the Calgary Pioneers, an all-gay hockey team. He said he sees hockey moving forward in its acceptance of LGBTQ players thanks to increased education and awareness. (Submitted photo)

Hockey is a sport that’s credited with building lifelong friendships and developing strong communication and teamwork skills while bonding in the locker room and on the ice.

For many players, the moments before and after games can be what they miss most, but for others who must hide aspects of their life from teammates (and sometimes friends and family, initially), it can be like living a lie.

Gay and hockey don’t typically go together. From the homophobic language used to the macho culture, it can make the sport intimidating and tough for teenagers to accept who they really are.

Minor hockey organizations have been working on acceptance of all ethnicities for years, and more recently, sexualities. Despite being a rugged sport, there are gay hockey players, and almost none reveal it to their teammates during their time in minor hockey.

Justin Connelly is a gay hockey player who recently came out in his 20s and is now an ambassador for You Can Play, which “works to ensure the safety and inclusion of all in sports – including LGBTQ athletes, coaches and fans.” (youcanplayproject.org)

“I kind of knew in my later years, Bantam and Midget, that something was a little different than some of my teammates, that I did feel a little bit different in the dressing room,” Connelly said.

“Going through that, there has been the mentality that environment is acceptable to use derogatory terms and to say ‘that’s so gay’ and for it to be acceptable. It’s part of that hockey mindset and hockey culture.”

Now a member of the Calgary Pioneers, an all-gay team in the Calgary Winsport Canada Hockey League (WCHL) and Calgary Gay Hockey Association (CGHA), Connelly sees progress being made in hockey’s acceptance.

“[You Can Play] thought up to this point a player already would have come out and they’ve both said they know there are gay hockey players,” Connelly said. “Again, it’s a huge personal thing for those players to come out and don’t want to force it.”

Chris Mosier, the vice president of program development and community relations for You Can Play, admitted it would have a big impact if an NHL came out, but they’re not pushing for it.

“Our end goal is not to get people to out,” Mosier said. “We know that there are athletes who may be out to their teammates but just aren’t publicly out. Statistically we know there has to be players who identify as LGBTQ in professional sports but there are a lot of reasons why people do or don’t come out.”

CHANGING LANGUAGE
Connelly said one big obstacle to overcome is the homophobic language and culture around the game.

“It can be tough on kids, not just gay players, if they may be trans, having identity issues or somebody bisexual – it could be any part of the LGBTQ community and they don’t know who they are. If they hear those terms in the dressing room or around that sport environment, they don’t feel comfortable,” Connelly said.

“They have fear and it’s the same with adults. I know there are some guys on our team who haven’t played in 20 years because they just didn’t feel comfortable playing hockey anymore because of who they were.”

Meanwhile, Mosier spoke about You Can Play’s goal towards eliminating verbal insults and hurtful comments.

“A lot of the work You Can Play does is around how language impacts and shapes the environment that we play and participate in, Mosier said. “Also how that can limit players, athletes, coaches, fans and other people involved in the sport their ability to fully participate and to feel comfortable. That respectful language piece is such a key component of the work we do.”

LOOKING TO THE FUTURE
As acceptance of all types continues in hockey, it also is progressing massively in day-to-day life.

“What I think we will see – as we educate coaches, parents and the older supporting system of minors – more young people be comfortable being their authentic self at a younger age. That’s the trend that we’re moving towards and a direction society is going,” Mosier said.

“More and more young people are starting to identify as something other than heterosexual – they’re identifying as LGBTQ. We’re seeing that it’s more commonly accepted among young people, athletes and non-athletes... it’s not uncommon for them to have a gay or lesbian brother or sister or to have same sex parents.”

“As our message says, if you can play, you can play. As a young hockey player, it doesn’t matter what your sexual orientation or your gender identity is,” Mosier concluded.